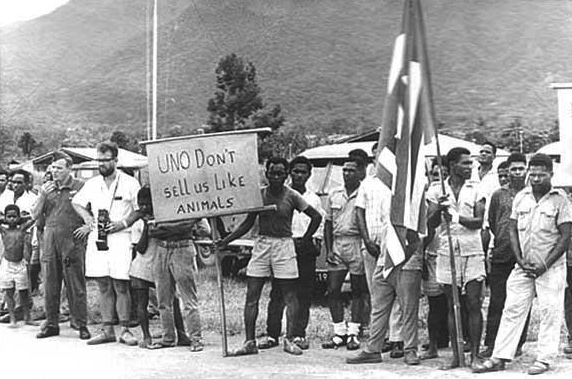 P – 2011:  The struggle for self-determination in West Papua (1969-present) by Dr. Jason MacLeod – a conflict summary published by the International Center on Nonviolent Conflict

V – 2013: “Back to the Stone Age“, seven photos and an article by Anne W. Semmes in the Greenwich Citizen

P – 2012 Survival International: Indonesia declares to the UN Human Rights Council that it has no indigenous peoples!

W – Wikipedia on “New Guinea” states that one sixth of the world’s languages are spoken by Papuan tribes. It also substantiates our claim that Papuans have been living on the island for at least 40,000 years, which is also substantiated by a Lonely Planet article and a joint academic report on the discovery of ancient human settlements

P – 2007: Greenpeace calls the “Paradise Forests” of Papua “the fastest logged forested area on Earth“
P – 2006: World Wildlife Federation states that the entire island of Papua (all of “New Guinea”) “has the largest remaining rainforest in the Asia-Pacific region”